We were hired to rebuild the top portion of a chimney in Manchester, CT. When we began tearing down the chimney, we found that the crown was supported by wood! Worse than that, the chimney joints were rotted and reverted to sand. There was an inch or two of proper mortar pasted over it to conceal the compromised construction by what appears to be a later improper repair.

When the second repair was done, it should have been rebuilt, not pointed. Unfortunately, many people think that pointing is a viable repair, and it very rarely is. Often, it is recommended and done by someone incapable of doing full rebuilds. There is a difference between a chimney guy, who can do minor repairs like pointing a chimney or crown work, and a mason. Masons are builders and Safeside Chimney employs only master masons to do our rebuilds! 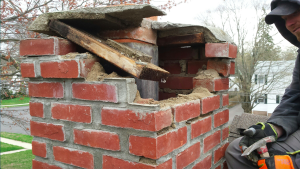 Categories : Chimney Rebuilding
Request A FREE Estimate
Safe side professionals were knowledgeable, very neat & clean while cleaning the fireplace/chimney inside my home, and courteous too. A good service for a good price!
Ericka L.
Steve and Mike were great. Fixed my chimney right up and left the place spotless, which was no small feat considering how much soot they got out. Been using Safe…
Will C.
Our basement had water after a rain storm and we suspected it’s due to the lack of rain cap on the chimney. We called safeside and they sent a guy…
DW