Prevent Fires in Your Chimney

Creosote is black or brown in appearance, and can be flaky along with having a sticky tar-like appearance. The creosote can be shiny and hard, depending on the length of time it has been in the chimney. The danger of creosote in a chimney is that it is highly combustible. The smoke, gases and tar minerals that come from the wood being burned in the fireplace goes up the chimney, but when these particles begin to stick to the chimney walls, this is creosote forming.

Debris come in many forms. It can be leaves and twigs that have blown into a chimney, because the current chimney cap is faulty or there is no chimney cap. It also consists of bird nests, raccoons and squirrels in the chimney. Animals are drawn to the chimney when it isn’t being used, because it is dark, private and warm. These type of debris can cause blockage, which can cause a fire.

It is important to have your chimney inspected and cleaned. It will keep your family safe from any chimney fires along with providing your home with a safe and comfortable source of heating. Give Safeside Chimney a call today and schedule your annual chimney inspection and cleaning. Get in the habit of doing this once a year, so your chimney is always safe.

For more information on our chimney services, click here! 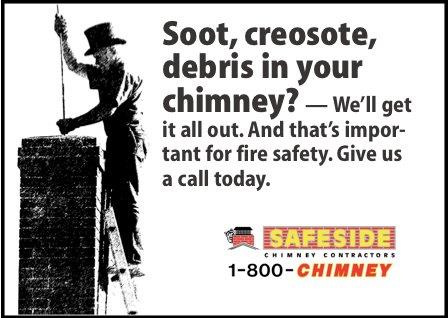 Categories : chimney, Chimney 101, Chimney Cleaning, chimney problems, Featured Post, Safety, spring cleaning
Request A FREE Estimate
Safe side professionals were knowledgeable, very neat & clean while cleaning the fireplace/chimney inside my home, and courteous too. A good service for a good price!
Ericka L.
Steve and Mike were great. Fixed my chimney right up and left the place spotless, which was no small feat considering how much soot they got out. Been using Safe…
Will C.
Our basement had water after a rain storm and we suspected it’s due to the lack of rain cap on the chimney. We called safeside and they sent a guy…
DW